Bigclimblittleclimb is the result of one patriotic Welshman, a grumpy Scot, and four very itchy feet.

Having thoroughly perfected the modern art of the 30-second cigarette and looking interested whilst sleeping, we decided that perhaps it was time to make an executive decision to, well, climb something else. Leaving homes, jobs and giant dogs behind, Celyn and Imogen are swapping the bright lights and balloons of the British South West for the greener, wetter and slightly more ruminant climes of New Zealand.

This site is for anyone who cares to come across it. It’s not trying to be anything. Not pretentious, nor rude, not to be taken as gospel and definitely not intellectual, our main aim is try and pack in as much information about the places we go, pickings we find, and people we meet along the way.

And a little bit about us… 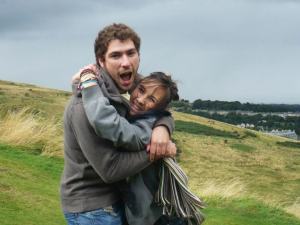 Celyn, ‘the only flanker who is everywhere’, is hard to miss. Hairy, Welsh and most likely wearing every conceivable colour under the sun, he manages to detract attention from himself by wielding his enormous camera. Toddling along (undoubtedly barefoot) beside him is trusty sidekick, Imogen. A meat-eating hippy, she enjoys indulging in dubiously trashy writing while wasting Rizla and pretending to speak other languages. We hope that together we can keep you entertained and (if possible) informed about living and working as a newbie in New Zealand.

The name? Well, it’s hard to come up with something relevant and original without skirting along the lines of surfy-hippy-traveller-I’m-both-knobbish-and-condscending…dude. Bigclimblittleclimb started as a joke and ended up sticking. Much like a nasty anatomical nickname.

Climbing’s the adventure part. We don’t have a plan. We probably won’t end up getting a plan. I guess we’ll just find out things  when they actually happen. (Always useful). The big and little, well that’s us. Big as in rugby player, little as in 5 foot nothing. Logical explanation, done.

That’s about it. Don’t hesitate to leave us a comment or submit a guest post if you’ve got something to say – we want to hear from you!

They say there is no cure for itchy feet. I suppose we’re just trying to prove it.

Be inspired to travel and experience this wonderful world we all call home.

not all those who wander are lost